Posted on January 1, 2015 Categories: Rescue Stories Comments are off for this post 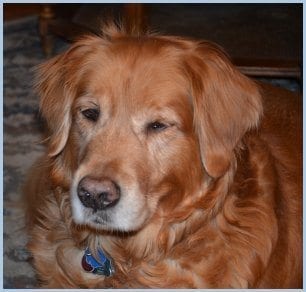 Tucker was 5 ½ when his family had to move under difficult circumstances. Their apartment had been broken into several times, making it unsafe for humans or dogs. The family moved out, but they could not find another suitable and safe place within their budget that would allow a large dog like Tucker. They made the difficult decision to place Tucker with YGRR, knowing we would find him just the right home.

Tucker was brought to one of the vet hospitals we work with and given a complete examination. He was neutered and had some suspicious growths removed. One of the growths turned out to be malignant, but fortunately it was a low grade malignancy. As long as the site of the original tumor was monitored and any future growths removed immediately,Tucker’s future looked bright.

Tucker was a sweet boy who loved toys of any kind. He would get a little silly and forget himself when he was excited, making him jump on people or get mouthy in play. He was a fast learner and wanted attention most of all, so he was easy to work with and a great dog to spend time with for staff and volunteers. Tucker knew some basic commands, such as sit and give paw, as well. Tucker knew how to turn on the charm!

Tucker is now in his forever home and he could not be happier! Tucker has friends wherever he goes – people are naturally drawn in to his good looks and winning personality. When his adopters take Tucker for walks, everyone in the neighborhood wants to say hi. His adopter even takes treats along so the neighborhood kids can give them to Tucker. Tucker has special dog friends he looks forward to visiting, and Tucker loves to greet all visitors to his home, as well. Tucker is a joyful and contented boy in his forever home, and Tucker’s adopters could not be happier to have him as part of their lives.

Tucker thanks you for your support. Tucker had a longer stay at Riverview than most dogs his age because he needed adopters willing to monitor his health as well as give him the right environment for his needs. It was all worth it to see how Tucker has flourished in his new home. Our adoption process always puts the dogs first, and we know you, our loyal supporters, wouldn’t have it any other way. Thank you for continuing to make these happy endings possible. Tucker and all the Rescue Goldens send big wags and kisses your way!